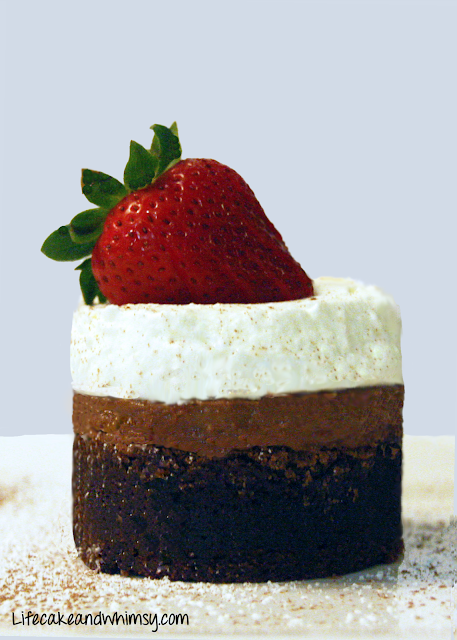 College football season just started, and that means, for some reason, that food must be better on Saturdays than usual.  In keeping with this practice, I promised to make something especially exciting for dessert if my husband did everything else, but I never really have time for that.  I had an idea and thought it would look fancy and complicated, when it was really cheap, quick, and easy.  So, I faked fancy.

To make this dessert, you actually need very few ingredients.  I just started with a large pan of regular brownies.  YES!  From the box!  They were on sale for $1, so why bother doing anything else!  I used 2 boxes in a 13 X 9 glass dish, to get a thick brownie.  I just made that ahead of time and had it sitting out.

When it was just about time for dessert, I whipped together some heavy cream and sugar for the whipped cream layer, and put it in a sandwich baggie.  No measuring.  You can't really mess that up, unless you over whip it.

Then, I gently folded together the 2 ingredients for the Nutella mousse. (Okay, it's not really mousse, but we said this was a fake, right?)  This is the only part that could be tricky.  I say it's tricky for 2 reasons. First, you have to pick your ratio based on taste. Too much cream cheese can be offensive to some people.  Also, if you don't use enough, or you overwork it, it will break into a greasy sludgy mess.  You can still eat it, it just won't be pretty.   I used about 2/3 of an 8 oz package of softened cream cheese, and about half of a small jar of Nutella (to serve the entire family).   This was scooped into a baggie for piping as well.

So the only thing I had to do was plate from there.  To do that, I sprinkled a little cocoa and powdered sugar onto the plate, using a fine mesh sifter.  Then I used a round cookie cutter to cut out the brownie.  (Biscuit cutters would work too, whatever you have with the most depth.)  I plated the brownie with the cookie cutter still in place to act as a ring mold.  Then, I piped in the mousse and the whipped cream, smoothing down the top with a spoon.  Then, I just sprinkled a little of the cocoa on top and hit it with a strawberry.  Super easy! 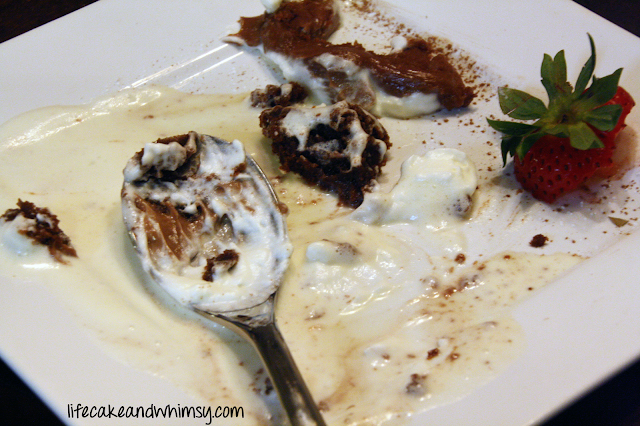 Oh, I did forget that I wanted serve it with ice cream, and added some after the fact.  I thought that since we were going for the fancy look, I'd add a quenelle and that would do it.  Have you ever wondered why you always get a quenelle instead of a scoop when you are at a nice restaurant?  I was always curious about why chefs like to do that.  I think I  once asked my friend Tracie, who is a chef, but I don't remember what she said.  Anyway, I know why now.  It is hard!!!!

I tried shaping one of those suckers with 2 spoons, and after more time than I wanted to spend scooping ice cream, it just looked kind of meh.  I should've checked youtube for the one handed method first.  Actually, I should make youtube videos so you can compare my technique, or lack thereof, to the pros. That would make for a good laugh.  Oh well, I'm just trying to fake it anyway.

Speaking of faking it.  Mine didn't look perfect.  I could've cleaned it up the edges a little, but hey... the game was on and people were hungry.  I tried to straighten it up a little before posting, but I'm bad at that too.  It's okay, because I'm just a mom and this is just a mommy blog.  So, in full disclosure, here's what it looked like when it was just a real dessert. 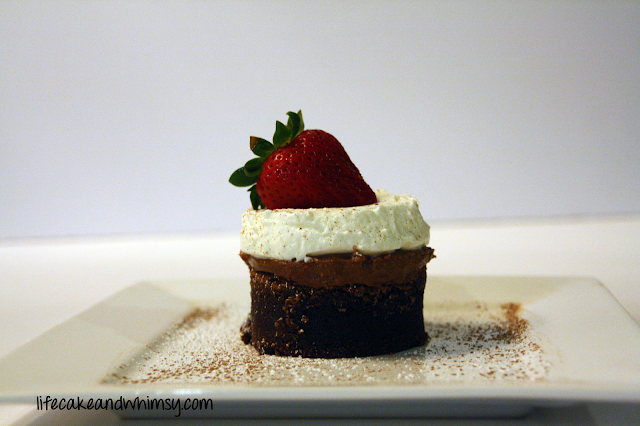 Thanks for checking it out! Feel free to leave a comment about fancy plating, or faking fancy plating!
Share:

Kayla
Hi, and thanks for visiting my blog! My name is Kayla, and I'm a wife, homeschooling mom to 4 challenging kids, and aspiring servant. Visit my "About Me" page to find out more, and don't forget to comment and get connected!
Add comment
Load more...