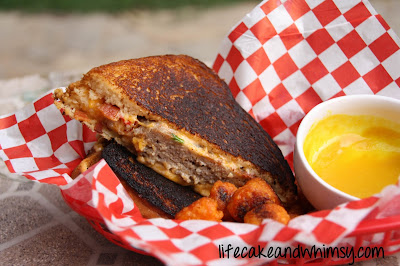 Okay, so I must admit that, although I may be from the south, AND I am a cheese lover, pimento cheese is not the first thing that pops into my head at dinner time.  It never really has at all.  Ever.  However, the other day I was thinking about what I had on hand to make a grilled cheese, besides American, and I had one of those moments.  You know, one of those moments where something randomly pops into your head and sounds perfect at the time.  Well, I fixated on giving pimento cheese a shot, mostly because we had an open house for our homeschool co-op to get to, and I needed a quick fix.  Anyway, I decided that a hamburger patty, and even better... BACON would step that grilled cheese up a notch, so this is what we ended up with.

Okay, so It was pretty much all of your familiar pimento cheese ingredients. 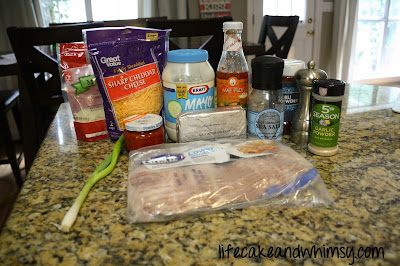 I added the remainder of an opened bag of mozzarella, because I needed to use it up and the kids like the stringy effect you get when you pull apart melted mozzarella.  I also added chili powder and sweet chili sauce, along with a chopped green onion, because I don't follow directions well. 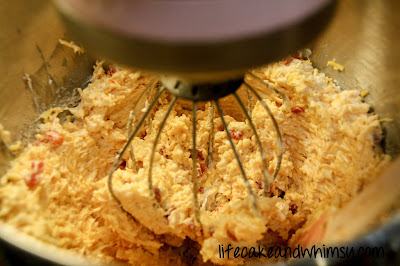 I just threw a package of softened cream cheese, about 1/2 of a cup of mayo, a bag (2 cups) of extra sharp cheddar (plus I opened a second bag and tossed in some more), the contents of that left over bag of mozzarella, and a few of the chopped pimentos.  Okay, so I didn't add that many pimentos, because pimento cheese is just an excuse to eat cheese and call it something besides a cheese sandwich, but no one really wants to eat a mouth full of pimentos.  Oh, I also added some garlic powder, salt, black pepper, chili powder, and about a couple of tablespoons of sweet chili sauce.  I never measure seasonings, because those amounts are personal preference.  I just taste and add more as needed.

***While this was mixing, I cooked a package of bacon and forgot to take a picture.*** 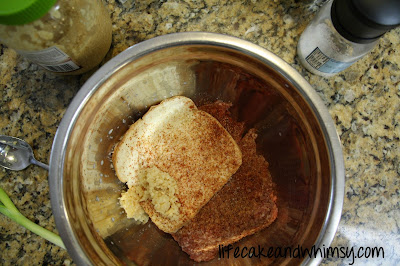 I decided to go with a very basic patty, considering the smorgasbord of flavors already going in one sandwich.  I had a pound of ground pork that I was supposed to use to make pan fried dumplings, but I had that open house thing, so that was a no go.  Anyway, I used 1 pound of the ground meat, salt, black pepper, a small load of garlic (because I use garlic as liberally as I use bacon), and a milk soaked slice of bread (that's what my grandmother always put in her meatballs, so if it was good enough for her, it's good enough for me).   This is the part where I remove my rings and squish.  Good times. 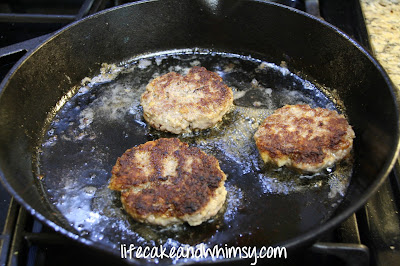 Then, I cooked the burgers in the same trusty cast iron skilled that the bacon was fried in.  I never said this was healthy, I said it was hurried. 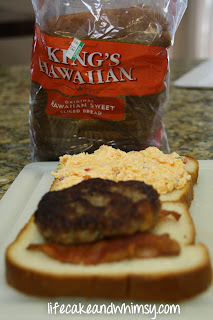 So, as I was prepping the sandwiches, I realized I failed to include a key component of this sandwich, which was the King's Hawaiian bread.  It's soft and sweet, so I thought it would go well with all of the salt from the cheese and bacon.

The last step was to put the sandwiches together to toast the bread and melt the cheese, you know, because it was supposed to be a grilled cheese.  At this point I was yelling at everyone to get out of the dirt and get ready to eat, because I'm sure we were already running late.  Therefore, I have no more pictures of the cooking process.  If you don't know how to make a grilled cheese sandwich and require a tutorial, you probably need more help than I can give anyway.

As I was making the sandwiches, I also baked some sweet potato tater tots and added some honey mustard sauce for dipping.  (I was out of honey mustard, so blended some honey into some yellow mustard just to try.  It was good, so it was served as is.)

As you can see, the sandwiches are a little on the well done side.  That's par for the course in my kitchen.  I'm almost always running late, so low and slow is never an option.  When you combine that with my ADD, and the fact that my house is wild, and growling tummy/hurry up and get ready to go somewhere time is the most chaotic time of day, you get extra well done toast, sandwiches, etc.  I can still remember #2 telling me, when she was about 3 years old, "It's okay, Mommy.  We can get a knife and scrape off the ashes."  My poor kiddos!  Hopefully, I'm not alone. 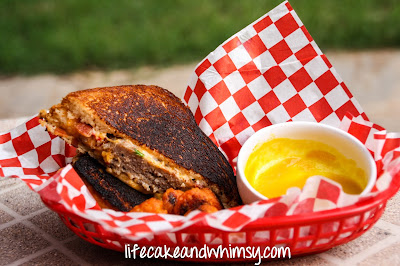